It is hard to know where to begin on this subject, for the reason that one cannot tell with certainty, if at all, when, where and by whom the work of school mastering began in Croom. One thing certain however is that the work was carried on at all times even under the most difficult conditions and in defiance of the severest laws, and most drastic penalties enacted against anyone of the Catholic Faith who attempted to teach. When certain concessions were granted in the 18th Century the master began to teach, “In the shelter of a friendly hedge his group of ragged pupils”. There the school opened to the music of the fleeting blackbird, soaring lark and spellbinding thrush……… The days of the hedge schools are long gone, thank God, and there has been much improvement since, but our story lies in between.

The only schoolmasters that are mentioned as of Croom in the 18th Century were Sean O’Tuama and Andrias McGrath.They were not professional teachers: They were teachers from necessity and for short periods only. Though they deserve mention as teachers, it was in another field that they exhibited their talent. Their poetic works live after them, a true and lasting monument to their memory. O’Tuama is buried in Croom, while poor McGrath, the silver tongued singer of Slan le Maigh, found a resting place by the door of the Augustinian ruin in Kilmallock. 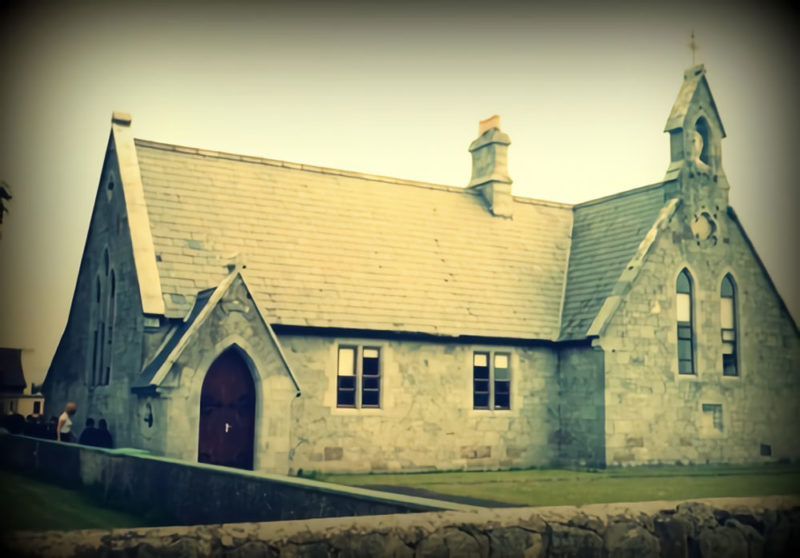 Written Records
It is only when we get down to 1830 that there is any written or printed record of the existence of a teacher in Croom parish. It is recorded in that year that one Master Bennett taught in Honeypound 130 Catholic pupils and one Protestant and earned from the State for his services the munificent salary of £10 per year!And his case was not unique. In Mournane, also in Croom parish, Master Storan received a like reward, as did D. Barron in Banogue. It is pleasant to relate that descendants of these teachers strongly survive to this day in the parish of Croom. There is no record of the school in the town at that time, except that it was in all probability in the house at the Barrack Cross once occupied by Joseph Farrell and now occupied by Tony & Maureen O’Connor. It was definitely a schoolhouse immediately before and for many years after the Famine down to the building of the present school. There was also a classical school in the village, but its whereabouts, its teachers and its period of existence are not known. There is little doubt, however, that it was taught by the local priest with the particular object of giving possible candidates for the priesthood a foundation in Latin and Greek.

New School
Towards the close of the 1850-60 decade the Parish Priest, young Fr. Hartnett, decided to build a central school for the parish. The work was completed in 1863 but Fr. Hartnett did not live to see its completion. He died in 1861.

The land it was built on was taken over by Cromwell’s armies, and was given in trust to the Dun raven Estate. The best-known family in Croom in the 1860’s was the Lyons family. They were a Catholic family, but were friendly with the Dun ravens, and on the occasion of the wedding of one Captain Lyons to the daughter of Lord Montague, whose family name was Robinson, Dun raven made a present of Land in Croom and Dona man to Captain Lyons. The site of the school was part of that present and captain Lyons gave it to Fr. Hartnett.

The style of the building was based on the English Grammar or Charter School of the time, and that is why the windows look like those of a convent. The bishop of Limerick, Captain White of Nantenan, and Henry Lyons were made trustees, and the parish priest of the time, Fr. Quinlan, was made manager of the school. The building, including the teacher’s house, cost £1,474.

Staff
The school was divided into a girls’ school and a boys’ school, and in the late 1950’s a separate facility was established at the local regional orthopaedic hospital. School records dating from the early part of the 20th Century show that both rural and elementary science were taught as well as Health Habits.

The Hospital School
When Croom Hospital became the Regional Orthopaedic hospital in the late 1950’s a school was established there to cater for children who had to stay for long periods. Miss Nora Cronin was principal in the late 50’s. She was replaced by Mrs. Margaret McGarry and her assistant was Miss Mena Ryan. Mrs. Sheila Moloney replaced Mrs. McGarry in 1964 and Mrs. Louise Lynch replaced Miss Ryan.

Amalgamation
In 1968 the three schools in the parish were amalgamated under the principal ship of Mr. Stanley O’Grady. Mr. Jimmy Murphy succeeded him in 1988.

Since then the following have served on the staff:

Support Staff
During the 1990’s the school was provided with Ancillary Staff. This was a joint effort between the Department of Education and FAS. Mr. Trevor Howell is the current FAS supervisor.We now have special needs assistants, secretarial staff and caretakers. All contribute to the clean and efficient running of the school.

Buildings
In 1965 Mr. Paddy Healy built a new school. A further wing was added in 1973 by Mr. Michael McDonnell to accommodate the ever-growing number of pupils.Such was the growth in the population of Croom that now both the old and new schools are in use, as well as a prefab.The second on site prefab is used as a play school.

During this the 21st Century we hope to expand our campus, so that we can have extra facilities on site in order to implement the new curriculum.

We are using cookies to give you the best experience. You can find out more about which cookies we are using or switch them off in privacy settings.
AcceptPrivacy Settings